What it means to be an IFBB Pro

IFBB Pro – International Federation of Bodybuilding Professional is the highest honor one can receive in the bodybuilding world. In order to be awarded a pro card, one must work their way up through placings to the international or national level and then be the best In their class that showed up that day.  Once a pro card is awarded it allows the competitor to compete in pro shows where money can be won, points can be earned or if a show win is achieved, an Olympia qualification follows. The Olympia is the highest level and most recognized bodybuilding event in the world.

As a coach and also competitive bodybuilder for over 28 years I know how difficult it can be to work the ranks up to turning pro. I have seen some compete on the same national stage year and year only to be passed up by someone who showed up better than them that day. It is my job to study the sport and understand exactly what the judges are looking for and to help my clients transform their bodies towards this look.

Becoming a pro takes years. Yes, I have seen a few who have won show after qualifying show then turned pro, however, the years were put in before they ever stepped on the initial stage. The pros I coach work with me continuously in their off season and pre contest so that we can continuously make improvements.

After working with Tamara for over a year I had not only improved my health, I also learned that competing did not have to be a miserable experience!

I met Tamara in 2013 when I was referred to her to help fix my damaged thyroid and metabolism. I had competed the year before with an unqualified coach, and had a terrible experience. I had no intention of ever stepping on stage again. After working with Tamara for over a year I had not only improved my health, I also learned that competing did not have to be a miserable experience! I decided I would give the stage another shot! I competed in 2014 and placed 3rd in my open class, qualifying me for provincials! From that point on I was hooked. I competed in 2016 provincials and nationals!

Every show I made improvements to my physique and presentation. Off season Tamara has always been just as diligent as she is with prep with my training and nutrition. I competed 3 times in 2017 finished the year with my first international show North Americans in Pittsburg. 2018 I competed in my first pro qualifier in Vancouver and came 2nd. I decided to compete in the first Olympia figure Amateur in Las Vegas 9 weeks later, winning my open class and earning my IFBB Pro card! I’ve come further in the sport than I ever dreamed possible. Tamara is the reason. I don’t think think she ever sleeps. Each client gets all the individual attention they need, and it’s obvious how much she genuinely cares for every member of team Tzone. It’s rare to find a coach like that these days!

This sport is hard in every way! Physically, mentally. It consumes your entire life if you want to reach a high level! Having a coach like Tamara at least makes it simple. You don’t have to think. You have to execute!

I started my working out about 7 years ago and trained with a trainer from our gym for a couple years. I did a lot of metabolic training which was great for getting lean but not the best for building muscle. My husband and I decided we wanted to change things up and start getting more definition and learn how to eat properly. We also wanted to have the same coach so we would be on the same page. This is how we met Tamara and how our real fitness journey began.

My goal when I started with Tamara was to train like a competitor but not compete. I wanted to grow my glutes and shoulders. Kevin and I decided we should train for something so we started to prep for our first photo shoot. I really enjoyed the process of prepping for something and loved seeing the changes in my body. After the photo shoot the goal was to grow my glutes and shoulders even more which meant putting on about 15 pounds. Once I wrapped my head around it I was good to go. After about 10 months of growing my muscles and making all the right changes I decided I wanted to do my first bikini fitness competition. I was now mentally ready and my kids were older so my first prep started December 9, 2017.
My first show was the Leigh Brandt Muscle Classic on March 24, 2018. I competed in Masters Bikini and Open Bikini. I won both my open and masters category and took masters overall. It was an amazing day to say the least. I received my critique from the head judge Rudy Jambrosic and he suggested that I compete at the Canadian National Pro Qualifier August 4, 2018. After a short 3 week break I was back on prep for the Tzone Natural Championship so I could qualify for the Pro Qualifier the following week.

On July 28, 2018 I competed at the Tzone Natural Championship in Masters and Open Bikini and won both my categories again. Now I was ready to hit a National stage in Toronto the following week.

With the support of my husband, my 2 sons and my coach Tamara Knight we were headed to Toronto. I was competing in both Masters and Open Bikini in two huge classes. The show had over 200 bikini women competing and over 80 in masters alone and that was the day I won my IFBB Pro Card in bikini masters. It was such a proud moment for myself and family and my coach Tamara. 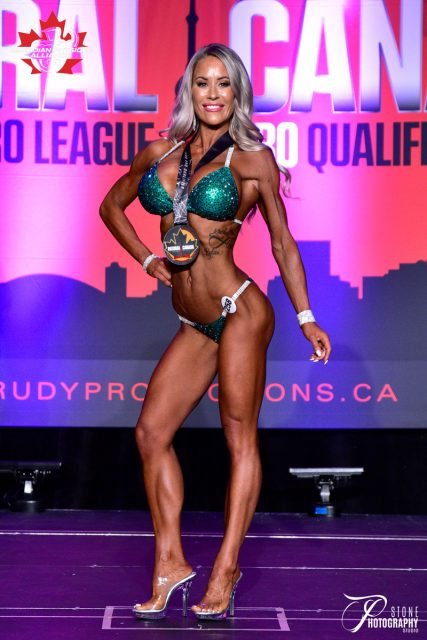 For more information on the IFBB Pro League
Click this Banner